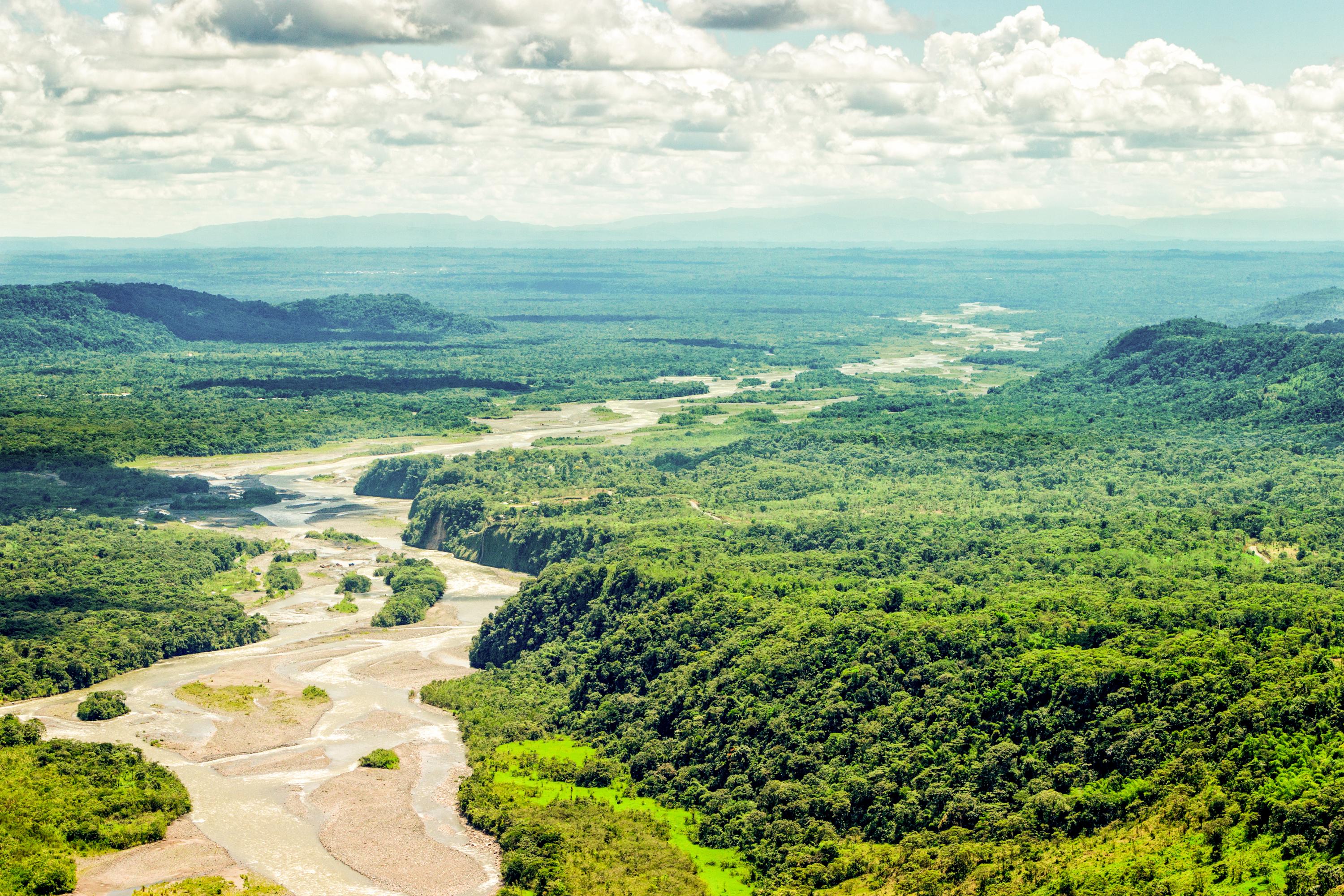 It’s all of America. An immense bird house. In the sonorous dawn every tree is a chorus. So many wings in flight lift America to heaven.

Jorge Carrera Andrade was not only an important Ecuadorean diplomat (who also served as Secretary of State in his country, among other things) but, above all, he was a great poet. In his most famous work, Poemas como la vida, he reconciles the international scope of his poetry with the magical dimension that inhabits every place in his homeland. This magical dimension is linked as much to the legacy of pre-Columbian civilisations as to the fascination and splendour of a lush and diverse natural environment. It will come as no surprise to anyone who has experienced it that the nature of these places has been conceived as animated by a divine nature.

Ecuador is in fact one of those countries defined as megadiverse, to emphasise the extreme richness and uniqueness of its ecosystems.

From east to west, it ranges from the rainforests of the basin of the Amazon River and its many tributaries to the coast overlooking the Pacific Ocean with its mangrove forests, passing through the so-called Sierra, the central part of the country -- crossed by the Andes -- consisting of plateaus, the highest point of which, Mount Chimborazo, reaches 6,130 meters above sea level.

Further enriching this treasure trove of biodiversity are the islands, the most famous of which are undoubtedly the Galápagos. Located about 1,000 km from the coast and particularly abundant in native species, in the 19th century, they were a deeply significant place and object of study of the British naturalist Charles Darwin, who was working on the theory of evolution, later described in his seminal book, On the Origin of Species.

Treedom's work in Ecuador began in the province of Manabì, which overlooks the Pacific Ocean with exceptionally beautiful coastlines that are becoming increasingly popular with tourists, thanks to surf tourism.

Like all provinces in the country, Manabì is divided into cantons, and the one where we started our work is called Jipijapa. Here, we are collaborating with the Universidad Estatal del Sur de Manabì (Unesum), a public research and higher education institution based in the city of Jipijapa, and with the Federaciòn de Agricultores Campesinas de la Zona Sur de Manabì (Focazsum), which represents 11 grassroots organisations of farmers and 350 farming families. While coffee is the mainstay of the planting work in this area, the collaboration with Unesum also enables training and research projects to be developed.

Between the Andes, the ocean and the volcano

The opportunity to develop agroforestry projects in a country with such a wide variety of environments led us to extend our activities to an area that would leave even the most seasoned traveller speechless: the slopes of the Cotopaxi volcano. At 5,872 metres above sea level, Cotopaxi is the second highest peak in Ecuador and the third highest volcano in the world. The Pacific Ocean is only 200 km away from its snow-capped peak, from which billows of smoke periodically rise. Fire, air, earth and water; in a small space, the 4 elements follow each other in a sequence that is unique in the world.

In this area of valleys sloping down towards the Pacific Ocean, the main focus is on cocoa cultivation, the mainstay of agroforestry projects, which combine it with other species to try to ensure maximum resilience to change.